Making peace with the past, and seeing it for what it really is, is both a painful and liberating process. I had no idea how much grief comes with liberation. 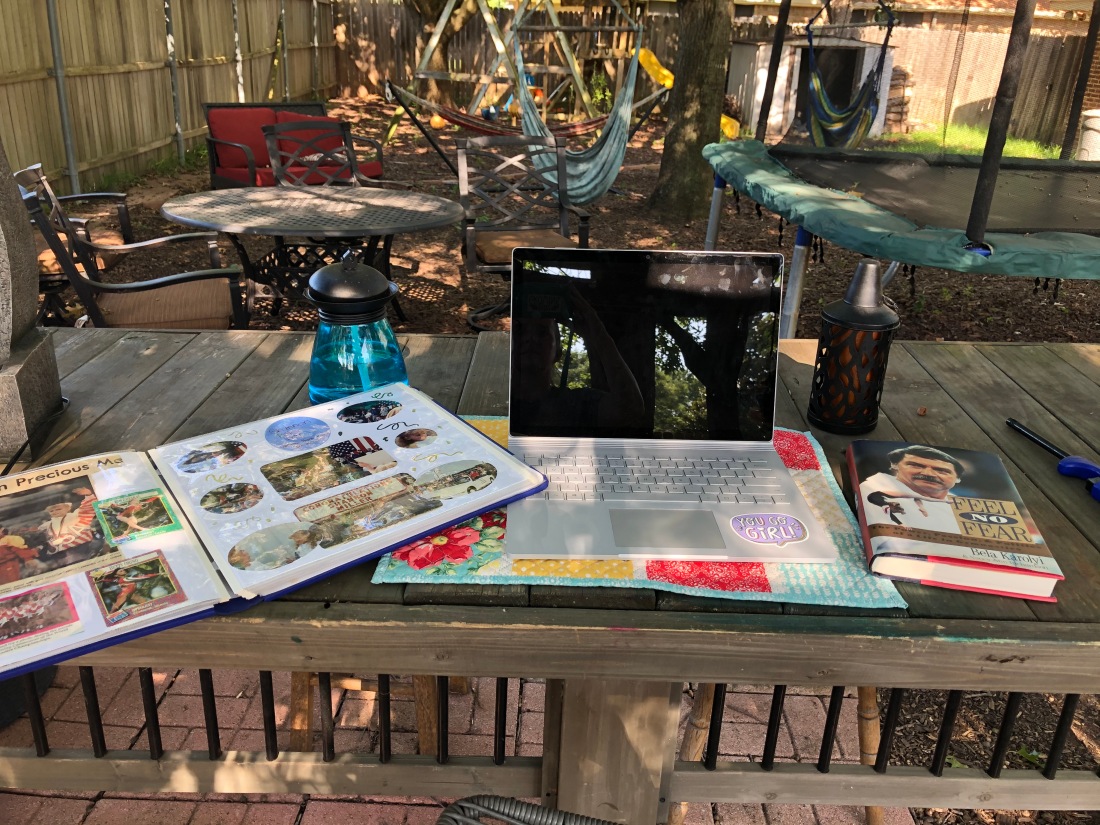 I asked Jake yesterday (July 9, 2020)  if I should get rid of these books. Now I feel the argument coming: You are erasing history!

Sigh. Right now I am keeping them, but like statues of oppressive people, they are coming down from my display. They are going into the museum at the top of my closet.

Also, look at my computer closely, Ellysia Banks, you are cheering me on to do this, my dear sister.

I am going to include Facebook posts I have already written that will be included at the bottom of the post. It is hard to keep rewriting what hurts. I am trying to move forward and heal, but I need to write this so I can.

I want to talk about the terrible things I knew coaches were saying, but adults did nothing about it, because they thought it was appropriate for the win. The way men and women coaches talked about the weight of young girls is so sinful it makes me cry thinking back on it. My mom did care though, and she took me to listen to Cathy Rigby talk about her eating disorders. I also did a book report on Tracy Talavera in middle school, and read about her eating disorder and how terrible her coaches were to her. I still remember all of this after all of these years. I was aware too many gymnasts had eating disorders, but I was too young to understand it was the system of gymnastics, and not just a few bad-apple coaches, that was the problem.

I held a trophy on the beam and was told to jump as high as I could with it. After I completed the task, I was told I would go higher if I weighed less. We also were weighed every week. I was often told I weighed too much. I remember telling one of my friends: I wish I knew how to eat just enough to survive. (Writing this is so hard). After I quit gymnastics, I got really sick and missed two full weeks of school. I went down to 88 lbs. My thought wasn’t I need to get healthy again when I saw this, it was this: Why couldn’t this have happened when I was a gymnast? I wanted my coach to see I finally lost the weight-even though it happened because I had a horrible case of the flu.

I want to lift up my mom again, because when I was really young (seven years old) in gymnastics-the age gymnastics wants to scope out talent- she listened to my tears and let me quit. When I returned at eleven, and did really well because I wanted it now, but the gym was way less interested in me because of my age and I had gone through puberty; I would cry to her and ask her why she let me quit. The one person that listened to me I turned on because of the damn gymnastics system that was harming young girls.

Here are statements I would hear from the “elite” coaches: Shannon Miller’s coach, Steve Nunno: Kim Zmeskal weighs too much now; I will let Shannon eat an Arby’s sandwich every now and then because she does so well with her weight. Then in the 1993 Worlds, Shannon Miller was really sick and fell off the beam three times. He was so angry with her. She was sick, and her mom had to sneak her bananas so she could eat, because he was starving her.

Bela Karolyi, I learned in his book, did not see the gymnasts as humans. He looked at what tigers would eat, and fed the gymnasts the same diet (steak) so they would perform like…tigers? Geez. How did we not see this sooner?

Every nationalized competition in the 1990s would show the gymnasts height and weight on the screen. We all knew. I started learning that other countries would not feed their gymnasts unless they won. I was really concerned about this. So much so, I did not want the US to win because I was afraid gymnasts from other countries would not eat. I had no idea the US was doing this too. Shame on all of us.

I watched the history of gymnastics and learned world history. I saw Vera Caslavska from Czechoslovaki, one of the most decorated gymnasts in the world, turn her head slightly in 1968 Olympics medal ceremony when the Soviet national anthem played, in protest. The Soviets had invaded her country, and she went home and was exiled for her protest. Anthem protests seem to be the way to get people’s attention. I like her more for this than any of the medals she won. She was someone I could see that wasn’t taking crap. But at the same time, she wasn’t as young either. The move towards babies and stunted growth happened after the darling Nadia Comaneci came on the scene with coach Bela Karolyi. She got the elusive perfect 10 – that displayed as a 1.0 because whoever created the board did not foresee anyone ever getting a 10. She was young and petite, and a new era entered gymnastics.

Bela and Nadia were also victims of a horrible regime in Romania. Nadia talks about her feelings when Bela left the hotel at one of their meets, and defected to the USA. He brought his philosophy and mentality to USA Gymnastics, and we all applauded. Eventually, Nadia defects to the USA too. I was at the gym when she came to Norman because she found her friend, and now husband, Bart Conner who took her in. It is weird knowing I have held Bart Conner’s gold medal, and I was at the gym when Nadia came to America. She had a stop before Norman, but it was a big deal when she made it to Norman. Life at our gym as we knew it changed.

I wrote about my story.

Here are some Facebook posts I have written recently, because I watched Athlete A. Seeing history for what it is, and not what I thought, is jarring. It is both liberating and a time to grieve.

Rethinking history is hard- even with current issues. I think about Bela Karolyi and almost every single US coach from US gymnastics-and coaches from other countries too. Despite “winning”, they never should have had access to children.
It is strange seeing the story for what it is, but it has to be done to heal and sin no more.
July 5:
I also thought about this today as I’m learning to see myself differently:
What if the fact I was just okay at gymnastics, even though I worked really hard, but I enjoyed it with everything I had in me, was the whole point. If the system valued the hardworking joyful person- how different would our world look? Mental health too?
(This also applies to my children who were sit out by soccer.
Jake Bruehl

made the path for Kimbo, bc this system would not).

travesty happened. I wouldn’t let it slide and it cost us.
Therapist: How did you feel when you saw Maggie’s mom and what she did?
Me:

June 30:
USA Gymnastics story has broken my heart, but so much of it I knew deep in my heart. When I’m in a better place I will share more. Something my therapist said when I told her I would feel guilty when USA (as a kid) won bc I was worried Russian children and the Chinese children wouldn’t get to eat bc they didn’t win. she said this: you saw at a young age a system not protecting children. Then you got in the soccer world and saw the same thing. You took on the role of protecting the children bc the system wasn’t going to.
(Little did I know USA was doing the same thing).
June 29:
I got on here to show I’ve been a protestor most of my life. This is a letter I wrote to Gymnast magazine in 1992 after Shannon Miller got the silver medal and Kim zmeskal was 10th- which only by American standards would we shame a teen for 10th in the Olympics. Anyone tired of winning now? I am.
Anyway, Newsweek put Kim Z on the cover in tears with the Title: It Hurts. They could have put Shannon Miller’s silver on the cover and mentioned  10th being great too. But no, Kim had been hyped up as America’s darling set to bring home the gold bc she was our first World Champ. Silver and wasn’t good enough for the cover. Look at the response. 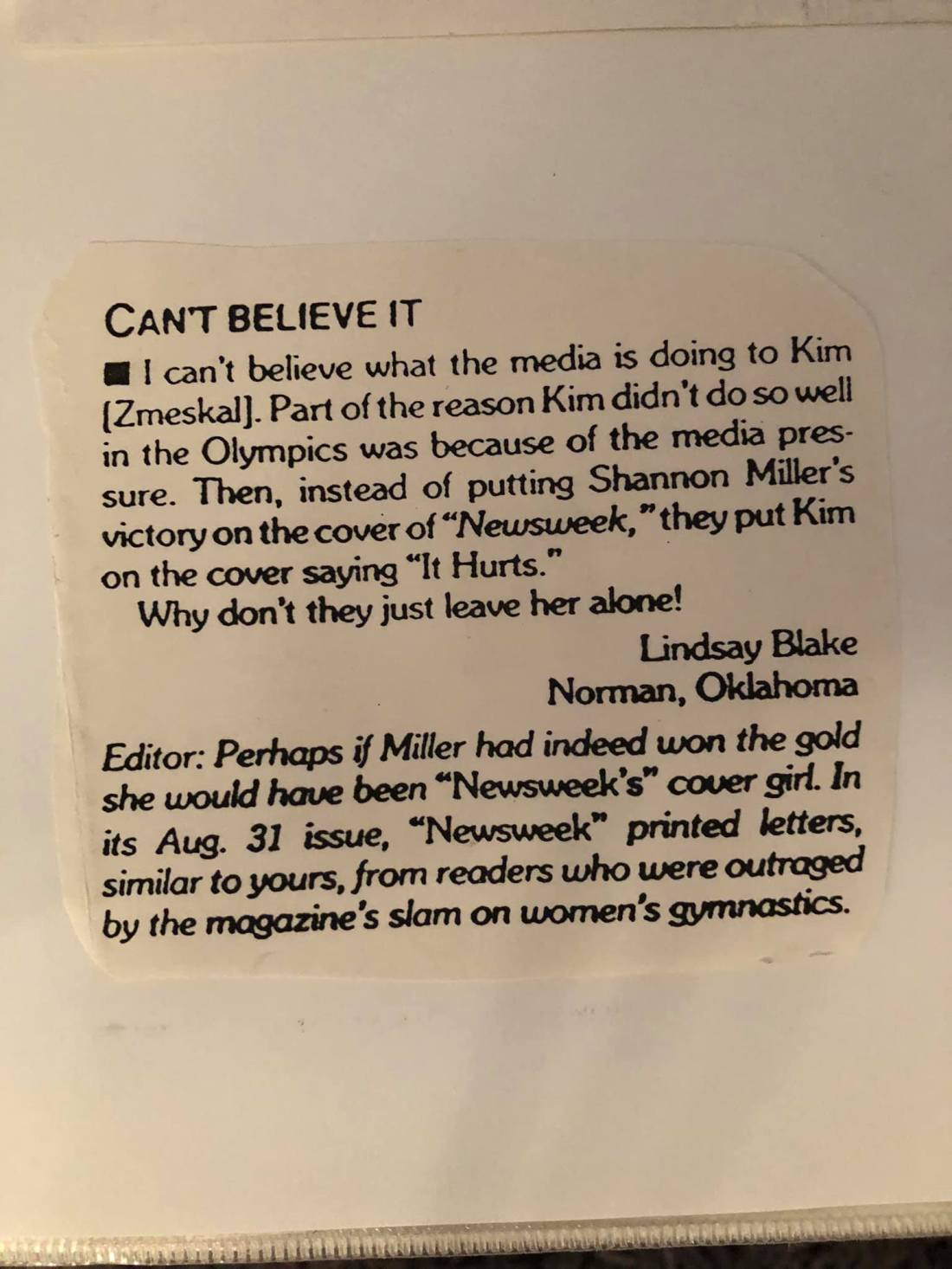